The making of IIBB 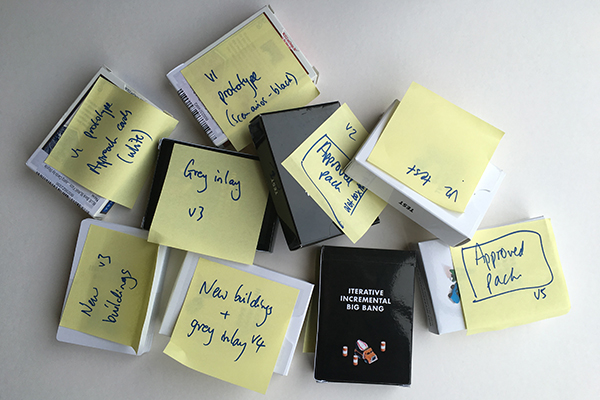 It might have taken over a year before it was available to buy on Amazon, but the production process of my new game lived up to its name: it was iterative, incremental and big bang.

The seed for the workshop game was planted in January 2015 after having another conversation about iterative and incremental approaches. As usual, skateboards and the Mona Lisa were wheeled out by someone in order to explain the differences and benefits. I love Kniberg’s drawing as an explanation of MVP (or ‘Earliest Testable Product’ as I agree it should be renamed), but I don’t think either quite hits the mark on explaining the benefits of delivering incrementally or the benefits of delivering iteratively; Kniberg’s top illustration may show a car being delivered incrementally, but without benefit. Don’t get me wrong, I’m sold on the benefits of iterative AND incremental delivery, but as a trainer explaining the two concepts, there is a difference and they both have their own merits – even when used in isolation (such as in shorter waterfall cycles)!

Could I come up with a better way to visualise the different approaches with a physical product. Could I add an image to represent a truly waterfall, big bang, approach too? Could I also find a fun way to get this across to people?

By April … I’d fleshed out an idea. Tim Smith (of mypoorbrain.com) and I had thrashed out some ideas for the illustrations and he had started creating something beautiful. I’d also bought a couple of plain poker decks, created a hand-written Earliest Testable Product and run a couple of workshops with some friendly faces. By June … we had the first version of some illustrations and put them out for feedback.

By August … I’d worked on some potential rules for the game, got some test packs produced, taken it to LADG and Agile on the Bench and played the game some more. Again, we gained invaluable feedback about both the illustrations and the game mechanics.

By December … we’d changed the design and layout four times (and had six more test packs printed) and agreed on the ‘final’ designs. By the end of January … I had paid a four-figure sum to go to print, only to spend another eight days talking to the printers to make sure that the design wouldn’t look off-centre. We made further changes to the designs, until the printer, Tim and I were all happy that they would look perfect: we knew that we would only get one run at this! I then spent a nervous 7 days waiting for the boxes of cards to arrive. When they arrived, they were perfect. Phew! The big day arrives when 200 packs hit my doorstep

In February … I created a place to sell the game on this site. I then applied to Amazon for a sellers account and got them on Amazon. My first two orders came the following day. I then added more pictures and improved the description over the following days, and then started promoted it through various other channels. After a year … it’s finally listed on Amazon

A variety of approaches

This story contains iterative AND incremental AND big bang approaches – each having their own benefits. For example:

The process was very educational even for an old-timer like me. Most of all, it reminded me that I don’t like the stress caused by the risk of a big bang approach, even though it might sometimes be the best way.

If you would like to buy Iterative Incremental Big Bang, then you can buy it directly from scrumandkanban.co.uk for £20.00 + £2.50 P&P or via Amazon.