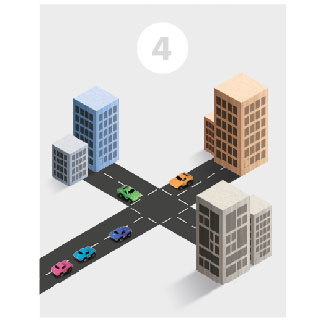 Although we don’t favour revolutionary changes, most of us first experience agile through a radical and wholesale transformation to Scrum. Along with all the changes to roles, meetings and working approach, we find ourselves bombarded with new terminology. Two terms that seem to confuse many newbies (and not-so-newbies) are incremental and iterative.

I discuss the difference between these two terms in my introductory-level workshops and talks, but I’ve never been happy that an explanation was sufficient; I wasn’t convinced that showing two approaches da Vinci could have used to paint the Mona Lisa really cut the mustard.

With the help of Tim Smith at ustwo I developed a new set of drawings (see previous blog post) and was determined to build a ‘game’ that I could use in workshops to make the concepts more memorable. After a few tests with friends and colleagues, Jiten and I selected four of our favourite options and ran them at yesterday’s LADG.

This is the entry-level game that would be run after an explanation of iterative and incremental. We foresee it being run by an experienced facilitator.

This is similar to game 1, but the aim is to lose all of your cards. It may require a bit more ability from participants, but would be a good session for teams to run.

The twist in this game is that, as players are only allowed to declare an approach on a card they are still holding, they are forced to formulate arguments for approaches they don’t necessarily agree are best for the scenario being discussed.

This game takes formulating arguments one step further. It would be really useful for team bonding and for discussion groups like LADG, where there is a mixture of experience in the group.

Everyone gave us great feedback on the game and illustrations and we thank you for your engagement and honesty. Funnily enough, some people thought the scenario cards were great because they were vague; others wanted them to be more specific. Some people liked having a winner at the end of each round; others preferred an open discussion and didn’t like the competitive nature. It looks like having a number of options for the rules is the best approach.

We would love any further feedback whether you played the game or not. This could be about the games described above, thoughts on the illustrations or maybe even ideas for different games and stuff we haven’t even thought about. Oh, we are also looking for a better name than Iterative, Incremental, Big Bang.

Last night’s feedback was positive enough for us to continue working on it. We will run a few more alpha tests, may even run a few games during talks and workshops. There will definitely be some changes to the illustrations and to the game rules.

If, after all that, we still think it has potential, we’ll go for a small production run. We estimate that the cost for a set (i.e. both packs) the cost will be around £20 (excluding P&P).

UPDATE: WE HAVE SINCE GONE TO PRODUCTION OF THE GAME! To hear more about the making of it, click here.