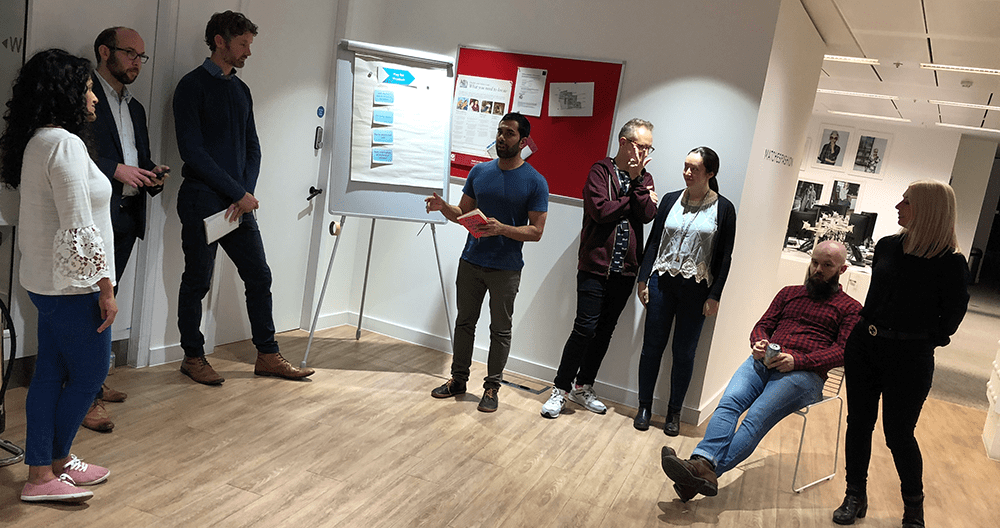 At this month’s meetup we tried something new: allowing people to learn by putting them in a simulation of a Scrum event. That is, we created a daily stand-up and retrospective using ‘actors’, then asked participants to jump in if they thought they could do a better job at facilitating.

Ahead of the session, the facilitators created eight personas for the Development Team members.

At the start of the session, we asked for eight volunteers to play each of our Development Team members (aka our ‘actors’). One of the organisers took the role of Scrum Master.

Whilst our ‘actors’ got into character, we casually split everyone else (‘the audience’) into five groups of 6-8 people, armed them with a bell and sat them near to where our actors would perform.

The stage was set.

The idea of stand-up #1 was for the audience to familiarise themselves with the characters in the Development Team. It was chaos. Nobody could hear any individual above the noise.

For stand-up #2, we asked our actors to take turns at demonstrating their persona’s characteristics. It was certainly better. The audience managed to identify some of the traits and then discussed in their groups how they might improve the team’s situation.

Stand-up #3 was where the fun really started. In this stand-up, the audience was allowed to halt the performance by dinging their bell. When they did this, the actor Scrum Master would step off the stage and be replaced by one of the audience. This new Scrum Master then had to interact with the Development Team to try to improve the situation. The actors did not make this an easy task, and the audience tanked a number of times.

After a while, the room had established that some big changes needed to happen for the team to be able to move forwards. Primarily this was to get a Product Owner involved and establish what the team should be working on.

At this point we moved on to the team having a Retrospective. One of the groups suggested that the actor Scrum Master should really contribute to the retrospective, so we added a new actor (me) to play the role of a Scrum Master from another team. I think this is where the format improved; rather than ask members of the audience to get up in front of everyone to intervene in the skit, we regularly paused the action and asked the audience what I should do or say next. This resulted in much more involvement from the audience.

We ended the evening with a ten-minute debrief on the scenario, then a five-minute review of the session’s format.

People enjoyed the format and want us to run another iteration. We received lots of suggestions for improvements, but the key ones were:

Firstly, thanks to the actors and audience. You were all such good sports.

Secondly, thanks to Adam, Gemma, Rachel and Rae who came on board to help plan and run the session.

Finally, thanks to Mike and Matches Fashion who hosted the event (and provided food and drink).

The next session of the London Agile Discussion Group is on 12 November. It will be hosted at Travelex (near King’s Cross) and is a debate: “it’s better to have co-located teams than distributed teams”. For more info, see the LADG website.