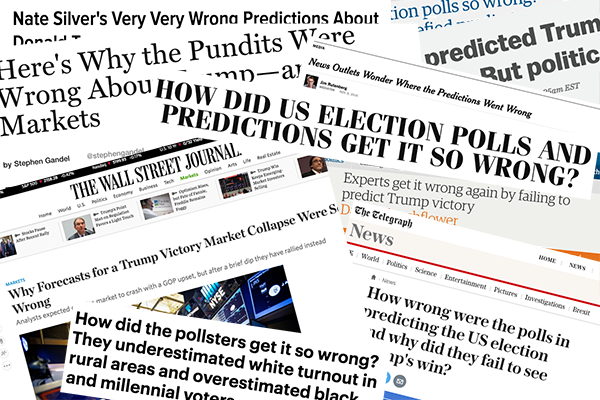 Did they really get it wrong? Surely after Brexit the pundits wouldn’t be that stupid. This week, we look back at the forecasting from the last 6 months on who would be the 45th President.

Helmut Norpoth of Stony Brook University predicted Trump as President. His statistical model uses each candidates’ primary results (as well as other data) to predict the winner. Because Trump beat Cruz by a bigger margin than Clinton beat Sanders in the primaries, Norpoth’s system predicted Trump to win. Back in February, Norpoth said there was a 97% chance of Trump beating Clinton and a 99% chance of beating Sanders. Everyone thought he was mad. His model, which he created in 1996, has correctly predicted all but one US election since 1912 (the exception was Nixon’s marginal win in 1960).

… and the not so hot

With similar confidence, but just before the election, HuffPost claimed that “Clinton has 98% chance” of winning. The US’s most respected forecaster, Moody’s Analytics, also said Clinton would win, predicting a clear win with 332 electoral votes. Their system looks at various real-life factors (e.g. household personal income, house price growth, fuel prices) and deduces that, if people are happy with their lot, then they will re-elect the incumbent party. They had been correct every election since they built their model in 1980.

Those on the fence …

By the time election day arrived, there were only four points between the two candidates. It was hard to call. The wise acknowledged this without trying to be heroes. For example, Allan Lichtman’s system, which uses 13 true-false questions such as “has the party in power done well on foreign policy” (where fewer than six false answers indicates incumbent party will remain in power; six or more false answers predicts a win for the challenging party), said that his model was “still uncertain … but it’s looking grim for the Democrats.”

… and the downright ridiculous

Let’s not forget superstition and non-causal outcomes. Back in June, Olivia Lace-Evans reported some of the more humorous theories:

If your surname ends with the letter ‘N’, then you have a better chance of becoming president – so Hilary Clinton would beat Trump. At least Trump’s win has put that theory in the trash can!

But one superstition still stands undefeated: if the country hosting the Olympic games in the year of election has not hosted before, then the incumbent party will lose. Brazil had not hosted the Olympics before so it predicted a Trump win.

So, did the pundits get it wrong?

Let’s remind ourselves what probability means: “the relative possibility that an event will occur, as expressed by the ratio of the number of actual occurrences to the total number of possible occurrences.”