What is the Agile Manifesto? 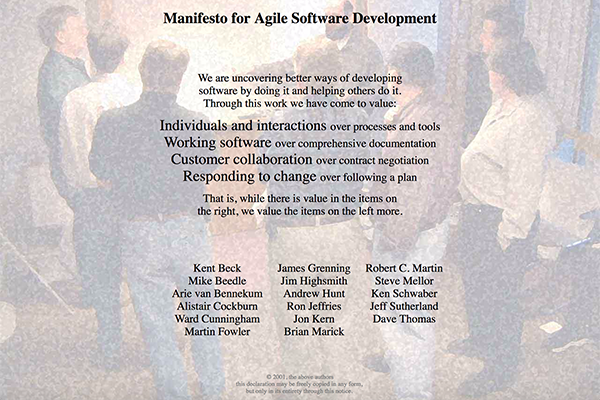 This week’s blog post is based on a chapter from our book, Scrum 101: the most frequently asked questions about Agile with Scrum, which is available to buy for £9.90.

In 2001, a group of seventeen software specialists met in a ski resort in Utah, USA. They came from a variety of backgrounds and had no unifying approach, each preferring their own technique (whether Extreme Programming, Scrum, Crystal, Feature-Driven Development, Pragmatic Programming or another).

Many referred to approaches as “light-weight” in reference to the lack of oppressive and cumbersome processes. However, the group felt that this term was detrimental and agreed on the formal name of “Agile”.

Despite their differences, the seventeen also agreed that a small number of underlying beliefs united all their approaches, such as working software being more valuable than extensive documentation. They produced a list of four core values and twelve principles, which they titled the Manifesto for Agile Software Development (Beck et al., 2001) but is more commonly known as the Agile Manifesto. We will refer to it as the Agile Manifesto within this book.

You can view the Agile Manifesto, and become a signatory, by going to agilemanifesto.org